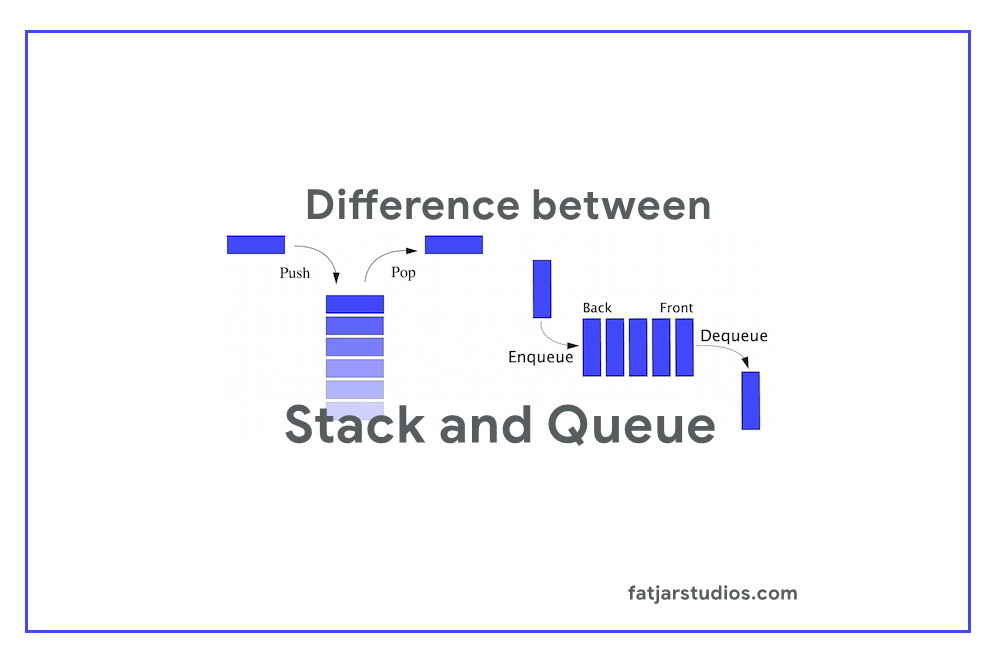 Data structures are the way in which they are accumulated and presented in the computer systems and utilized by the programs of a computer. The goal of data structures is to arrange the data so that it can be utilized in an efficient method.

Of these data structures, form the stacks and queues. Both store elements in a computer. So, let’s take a look at the difference between stack and queue in a computer programming language.

Definition of stack and queue

A non-primitive linear structure is known as “stack”. Here, in an ordered list a new element is added while the element that already existed is deleted from a singular end known by the name of TOS or top of the stack. Since all the deleting and inserting processes in the stack are performed from the top of the stack, the element that you will add right at the end will be the primary one to be removed. It is because of this reason that the stack is also known as the Last-In-First-out (LIFO) in the list.

Remember that the element that is accessed often is stacked right at the top while the last element that is available is at the bottom. Take the example of biscuits. When you take it for granted that only one side of the biscuit packaging is torn, and the biscuits are taken out from the packet one by one, this system can be called “pop”. On the other hand, if you keep some biscuits for later usage and pack it back in the same torn packet, this will be known as pushing.

On the other hand, a queue is also a linear data structure that belongs to the class of non-primitive category. The collection of elements here are all similar. The new elements are added in the rear end. At the same time, the deleting of the existing elements takes place at the front end. The type of list that is attached to the Queue is First in First Out or FIFO. The example of “Queue” can be taken from our daily life experience. We keep waiting for a service for our turn to come.

Do you know the Real-time applications of Queue in Data Structure? Surely we will discuss in coming articles.

The stack can be applied in two ways:

Here arrays are used to create a stack. Although it is an effortless method, yet it is not a very flexible process of creation. For memory utilization too, this is not such a sound technique.

Also known as the linked list representation, it makes use of pointers for implementing the type of stack data structure.

For queue implementation too, the divisions are two:

If you want to implement the queue using arrays, make sure that you assure the exact number of elements beforehand. This is to be done because the size of the array has to be mentioned at the time of designing.

In this case, the implementation of queues is done with the help of pointers. However, there is a disadvantage in this case. The linked representation has a node which consumes a lot of space in the memory.

Table of Difference between Stack and Queue

So, although queue and stack are both liner data structures, yet they differ in their own ways. However, both serve the purpose of storing elements as per the list and performing relevant operations as has been mentioned in the list.